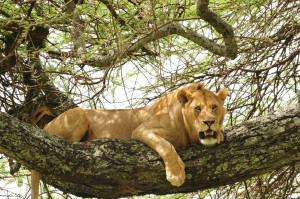 This 12 day (11 night) thrilling safari takes you through some of Tanzania's magnificent scenery and finest reserves including the 8th wonder of the world Ngorongoro Crater and three National Parks (Lake Manyara, Serengeti, and Tarangire) where game viewing is unmatched.

Lake Manyara National Park, in the Great Rift Valley, nearly 1000 metres above sea level, abounds with elephant, hippo and buffalo. The eighth wonder of the world – Ngorongoro Crater – rising high above the Serengeti plains is a vast natural amphitheatre rich in wildlife. This safari also takes you to the Serengeti, where lion, cheetah and hyena stalk their prey; Olduvai Gorge containing vast herds of antelope, wildebeest and lion. Tarangire National Park covers 2600 sq km of grassland and floodplains, and a large proportion of tall acacia woodland just south of the large open grass plains of southern Masai land. Tarangire is beautifully unspoilt, and safari drives through the park enjoy wide views to distant variously purpled formations of volcanic mountain ranges.

Arrive in Europe early in the morning. This evening, leave on overnight flight to JKIA Nairobi.

Upon arrival in the morning, you are met by Ashford Tours and Travel Representative and transferred to your hotel. The rest of the morning is at leisure. This afternoon you visit the Bomas of Kenya where you are entertained by traditional dancers. The tour ends with a panoramic City Tour of Nairobi. Hotel: Safari Park Hotel BB.

After breakfast, depart for Arusha via Namanga border post. Have your lunch at Arusha before proceeding on to the Ngorongoro Crater—one of Africa's true wonders of nature. The crater is 102 square miles and is the largest intact Caldera in the world. Arrive at Ngorongoro Sopa lodge in the evening. The lodge sits at the rim of the 1,800-foot deep crater with a spectacular view from all rooms Lodge: Ngorongoro Sopa Lodge LDBB.

After breakfast depart for a full day crater tour with a picnic lunch. With the exception of Impala and Giraffe, practically every species of African plains mammal can be found on the crater floor, including large herds of wildebeest and zebra, as well as hippos, flamingoes, lions and black rhino. Lodge: Ngorongoro Sopa Lodge LDBB.

Full day of game viewing in the park. En-route a stop at the Olduvai Gorge. This remote spot is the famous archaeological site where Mary Leakey, in 1959, discovered the fossil skull of early man dating 1.75 million years ago. Then continue on to Serengeti National Park in time for lunch and an afternoon game viewing drive. Lodge: Serengeti Sopa Lodge LDBB.

Full day of game viewing drives in the Park. The Serengeti is undoubtedly the most famous wildlife sanctuary in the world, unequalled for its great concentration of plains game. Lodge: Serengeti Sopa Lodge LDBB.

Drive to Tarangire for lunch. Afternoon game drive. Tarangire also has regions of quite dense bush, but with high grasses and huge old baobab trees instead of the green forests of Manyara. The land is hilly and dominated by the impressive valley of the Tarangire River, which attracts good numbers of migrant animals during the dry months, especially between July and September. Hotel: Tarangire Sopa Lodge LDBB.

After breakfast, depart for Arusha, arriving for lunch at the Impala Hotel. In the afternoon, depart for Nairobi via the Namanga Border post, arriving at the Safari Park Hotel in the early evening. An optional dinner at Nyama Choma Ranch Restaurant with entertainment by the hotel's Safari Cats Dance Troupe. Hotel: Safari Park Hotel BB.

After breakfast, transferred to the airport for your departure flight to Europe.

​Arrive in Europe early in the morning. Connect USA bound flight, arrive later in the day.

Excerpt: This 12 day (11 night) thrilling safari takes you through some of Tanzania’s magnificent scenery and finest reserves including the 8th wonder of the world Ngorongoro Crater and three National Parks (Lake Manyara, Serengeti, and Tarangire) where game viewing is unmatched.